Two-word verbs are generally a verb and preposition combination (e.g., check in). Sometimes this combo is a phrasal verb, where the meaning of the two-word phrase is does not correspond to the individual words (e.g., look up, as in look up a word in a dictionary). Not only do students have to learn common two-word verbs and their meanings, but they also have to know the spelling or punctuation changes that occur when a different part of speech is used (e.g., take out = verb, takeout = noun). Are there any rules that students can follow to take the guesswork out of the different parts of speech?

At ESL Library, we have teachers who subscribe from all over the world, so let’s look at the spelling and punctuation differences for these types of words between countries too. For reference, this post uses Merriam-Webster (online) for American English, The Oxford Canadian Dictionary of Current English (print) for Canadian English, and Oxford Dictionaries (online) for British English.

The general rule, which works in most cases, is to use the two-word form for the verb and a one-word or hyphenated form for the noun or adjective. Let’s take a look at some examples in American, Canadian, and British English and compare the verb (v), noun (n), and adjective (a) forms.

Sometimes it’s the verb form that takes the hyphen. Here are a few two-word hyphenated verbs that your students may come across:

Why do some two-word phrases contain a hyphen when others don’t? In my opinion there are a few things going on. Words that are very common tend to take a one-word unhyphenated noun form (e.g., takeout, sightseeing). Some spelling systems use a hyphen to distinguish an adjective form from a noun form (e.g., takeout n, take-out adj). Also, there is a trend these days toward less punctuation. People (and dictionaries) are using fewer hyphens and commas in English. Whether this is due to modern forms of communication such as texting and Twitter is a discussion for another day!

Finally, it can depend on the dictionary and region. If you spend any time with dictionaries from different countries, you’ll notice that American English favors no hyphens (e.g., reelect) whereas British and Canadian English prefer the hyphenated form (e.g., re-elect).

See takeout and sit-down in context in our Role-Plays lesson on Food. You may also find our blog posts on spelling interesting: American Vs. British Spelling in ELT Materials and Fast Food Vocabulary: American English Vs. British English. 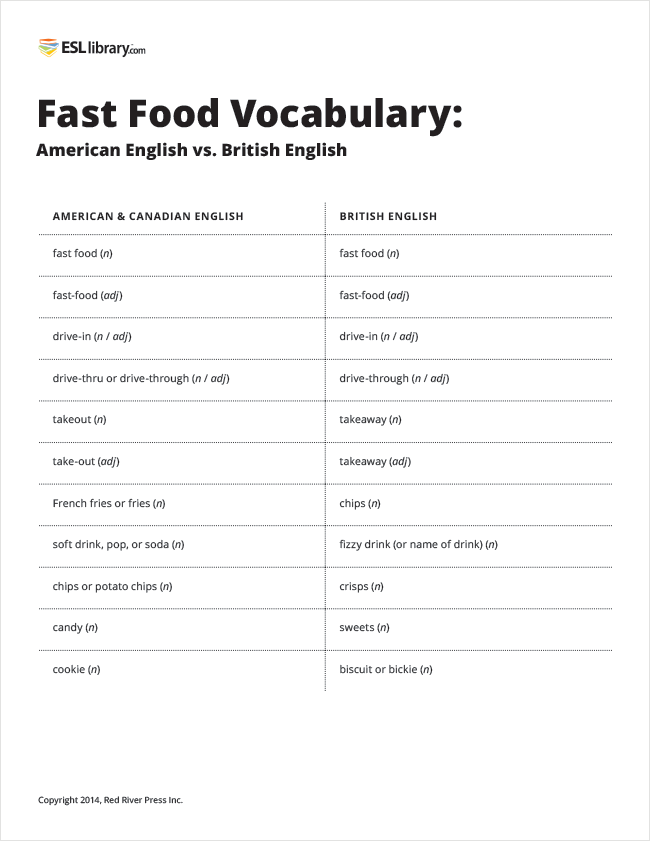 You can also try our Everyday Dialogues lesson on Ordering Fast Food. View the sample lesson if you are not yet a subscriber.