Have your students ever questioned unusual plural nouns? Sometimes they’ll see words like persons or foods and get confused. Persons was brought to my attention recently when our head writer’s daughter (who, I’m convinced, is going to be an editor one day) noticed a sign at the local pool that said:

Tara (our head writer) asked me later on about the sign. Why not write “All people must shower…” and “Only 1000 people…”? I decided to do some investigating!

I am used to only hearing people as the plural of person except in very formal, usually legal cases. To me, persons sounds old-fashioned and way too formal. I was surprised to learn that, traditionally, persons was the correct choice in some cases, such as with smaller numbers or with designated plural indicators (e.g., a number or a quantifier such as many or several). Merriam-Webster’s Dictionary of English Usage mentions that over time (and via many arguments among journalists and grammarians) people became accepted with round numbers (e.g., 100) but was still balked at for other numbers. As late as 1980, the Associated Press style manual (for journalists) declared that people should be used for all plural uses. Nowadays, people is the widely accepted plural form.

Merriam-Webster’s Dictionary of English Usage says “You can safely follow your ear in your choice of people or persons after a number—or simply use people, in accordance with the latest advisories.”

The Chicago Manual of Style, section 5.220, says “The traditional view is that persons is used for smaller numbers {three persons} and people with larger ones {millions of people}. But today most people use people even for small groups {only three people were there}.”

Google Ngram Viewer shows this result from books between the years 1800 and 2000: 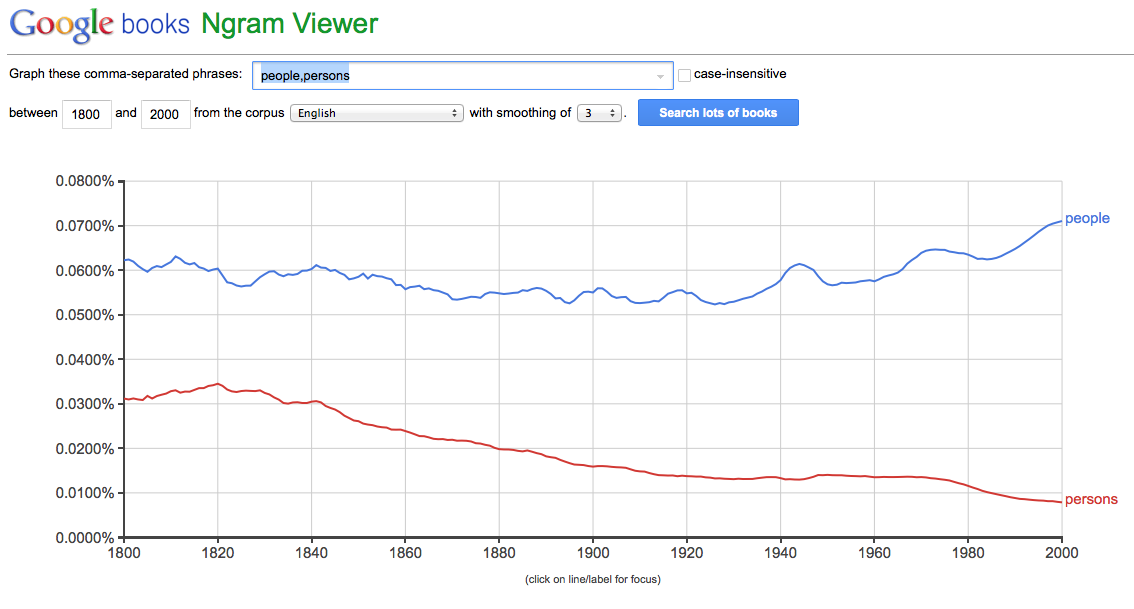 What should we teach our students? The experts agree that people is the accepted, modern plural form of person, and that’s what I teach my students. For more advanced learners, I might point out that persons is also possible in formal, legal contexts, though it is falling more and more out of use.

Could the pool sign have read “All people…” and “Only 1000 people…”? You bet, though legal wording such as this may still contain persons for some time yet.