I had my students learn these patterns…

Causative verbs are just what they sound like: verbs where one person is “causing” another to do something. English has three true causative verbs: have, let, and make. This grammar target has a special pattern that often confuses students because it requires a base verb where an infinitive verb would normally go. Once we present the pattern to our students and they see some examples, they should be able to remember to use the base form.

It’s also important to point out the other verbs with a similar meaning that are not, in fact, causative verbs. Verbs such as get, force, allow, and cause take an infinitive verb, not a base verb. 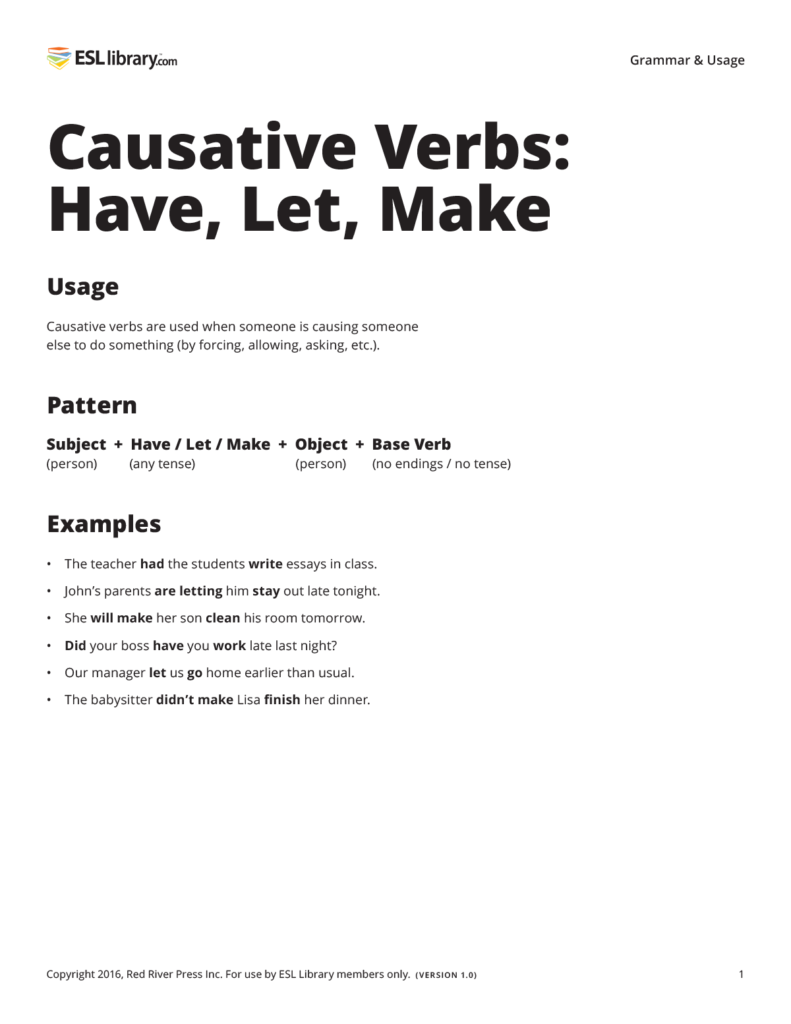 I. Causative Verbs: Have, Let & Make

The verbs have, let, and make follow this irregular pattern when they have the meaning of causing someone to do something. These verbs are pretty common in English and are usually introduced around an intermediate level. From strongest to weakest, the causative verbs are make, have, and let.

It’s important to give examples with both singular and plural objects as well as different tenses so that students truly understand that a base verb is required, not just a present verb. I find the biggest mistakes textbooks make is that they only give examples in the present tense. I’ve often had students tell me that they didn’t “get it” until they saw an example in the past tense.

The subject and object of causative sentences are usually people, but things are also possible.

Also, the imperative verb form (no subject) is common with causative verbs, since both causatives and imperatives are used for giving orders.

All other verbs, outside of the three causative verbs, will follow the “normal” pattern of noun + infinitive. This pattern occurs for most verbs regardless of meaning (e.g., My friend wants me to come to the party or She asked me to help her).

There are other verbs that have the meaning of cause, but because they aren’t true causative verbs, they take an infinitive verb form instead of a base verb. Common verbs are, from strongest to weakest: force, cause, get, and allow.

Get, especially, is very common, so make sure you remind your students that it always takes an infinitive verb, and give your students plenty of examples.

III. The Passive Causative: Get & Have

Subject (person) + Have / Get + Object (thing) + Past Participle

Can causative sentences be passive? Yes! The passive causative is quite common for services. For more information, see our blog post on the Passive Causative.