Teaching Tips on Other, Another, and The Other

Yet another confusing grammar point…

Other, another, and the other are terms that students should be familiar with at a fairly low level. They appear in most beginner and intermediate‑level textbooks as well as on tests such as the TOEIC. Yet a lot of students seem to have trouble grasping when to use these adjectives. (I’m using Merriam-Webster’s categorization of “adjectives” for these terms, but personally, I usually refer to them as articles or determiners since I think that’s closer to the role they fill—but that’s a discussion for another blog post!) Once I started explaining these terms with the following chart, my students had an easier time keeping them straight. I hope your students will find this chart useful, too! 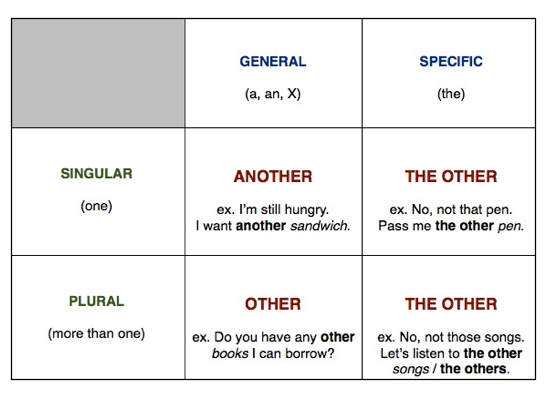 Notes for teachers on General vs. Specific:

Notes for teachers on Other, Another, and The Other:

I hope your students now have no other questions about these terms!